Opening up about “Front” opening night 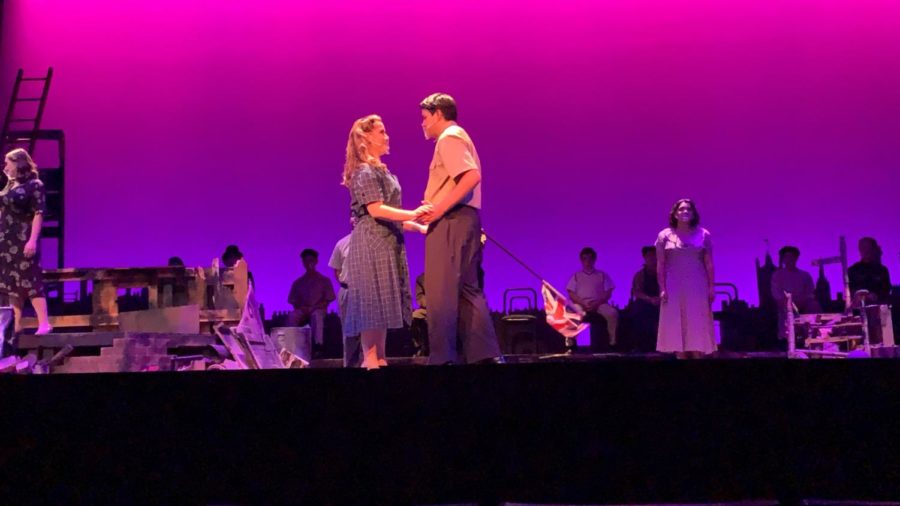 Giovana Watson '22 and Salvador Garcia '24 share a tender moment at the end of the show. (Photo Credit: Debbie Watson)

Trinitas’ production of “Front” opened on Thursday, Nov. 11, and closed this past Sunday, Nov. 14, and the end result was nothing short of fulfilling.

Everyone performing and working tech backstage contributed an incredible amount of time and effort into making this production. As the first show post-pandemic with a live audience in the theater, it is one of the most memorable shows to be performed on the Servite stage.

not knowing what to expect, but it was honestly incredible being able to support and watch my friends perform after all their practice and time. It was one of the best shows I saw, and everyone did so good.”

Trinity Delacruz ’22 also said, “I thought “Front” was an incredible play. I could tell that a lot of work had been put into the production. All together, the play displayed an emotionally raw perspective of the horrors surrounding World War II, and the actors did a great job doing that. One of my favorite parts was the Interview with the Dead. I got actual chills. I had no idea we had such talented actresses and actors at Rosary and Servite!”

Several of the actors and techs were very excited about the success of the production. Trinitas newcomer and senior Melissa Hanson shared this about her first production: “I loved opening night so much! It was totally new to me, but it was nothing short of being amazing. Overall, “Front” was so much fun to be in and to finally put all of our hard work and perform. Everyone was nothing but supportive with each other, and I miss it so much.”

Katie Thomas ’22 also had this to say: “Opening night was surreal. I started at the top of the show walking in from the back of the house. I was supposed to be sad, but almost couldn’t stop smiling because I was so excited that there were actual live people sitting in the theater. I looked out at the full audience, walked offstage, and immediately started crying happy tears. It was the best feeling.”

Tech crew member and senior Savannah Kondo said, “I loved how warm and welcoming the Trinitas community was to me right away. With the short amount of time that I’ve been in the Trinitas community, I feel like I’ve already created a really special bond with the cast and crew of “Front.” I can’t wait to see what’s in store for the rest of the year!”

Also, a great amount of credit goes to Mr. Marrone, Mr. Robertson, Mr. Gleason, Ms. Carter, and Mrs. Buehler, who oversaw and guided all of the students involved in both tech and acting, as well as the management and direction of “Front.”

The production was a beautiful and deeply moving piece. The dedication of all involved in the execution of this show truly shone through in every performance. Be sure to attend Trinitas’ next production, “It Starts With A Dream: A Disney Revue” on Jan. 14, 15, and 16.