We Can Survive concert review 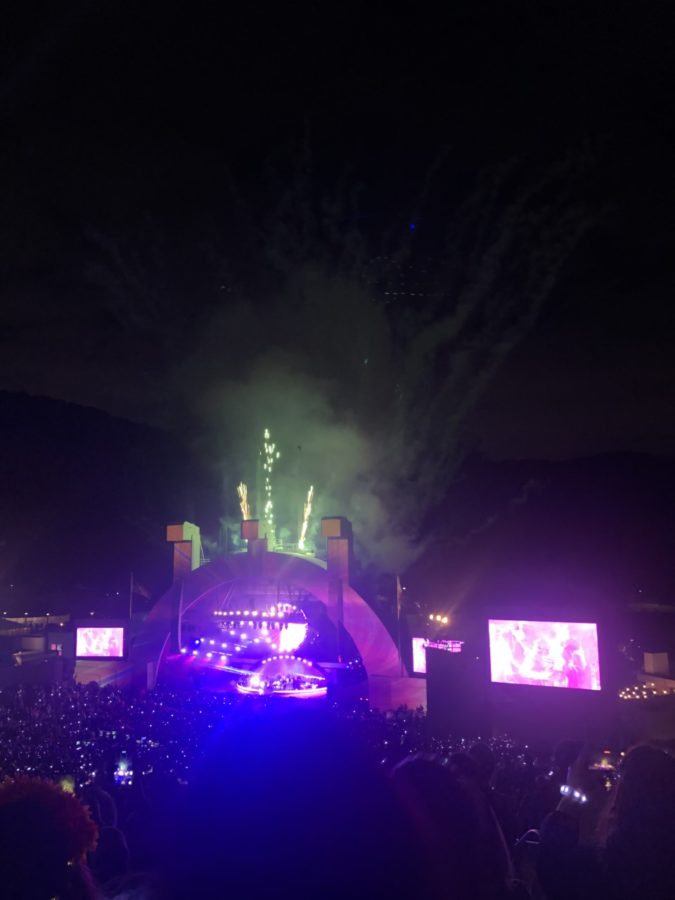 The whole crowd exploding in applause at the end of Coldplay's last song.

This past Saturday, Oct. 23, I went to the We Can Survive concert for my childhood friend’s birthday.

The performers were Saweetie, The Kid LAROI, Shawn Mendes, Maroon 5, Black Eyed Peas, Doja Cat, and Coldplay. I was curious about how this concert was going to go because although I knew these were big performers, how would the overall show from beginning to end play out?

Let me just say—it was one of the best times I’ve ever had in my entire life.

Join me down memory lane remembering how awesome each and every performance was and how my friends made it even better.

As soon as my friends and I saw each other, we hugged so hard because it is rare that we all get to see each other together since we all go to different high schools.

The first performer was The Kid LAROI, and the screen lit up to say, “Now please welcome the Kid Laroi!” The crowd applauded and out came running The Kid LAROI. Now I’m going to be honest, The Kid LAROI was not my favorite performer. He seemed a little fake and tried to appear as the next Justin Bieber even though he is nowhere close to comparison. It also annoyed me how much he ran around the stage. I was like, “Dude just stand still next to the microphone and sing for one minute.” Although it was not the best, I enjoyed seeing my friends have such a good time, and I liked the meaning behind his songs.

The next performer was none other than Shawn Mendes. He sang his new song “Wonder,” and a classic “Treat you better.” He has the most beautiful and powerful voice. His performance and energy was top notch and exciting to watch. I loved how he really went all out and was happy to be there. The most unexpected thing that happened was that at the end of the second to last song, he jumped into the pit and started hugging fans. My friend starting crying because of how badly she wanted to hug him. What I liked the most about Shawn was how he reciprocated his fans happy and excited energy.

To my surprise, after Shawn left the stage, Maroon 5 came out and gave an awesome performance. Out of every performer I watched, I think that seeing Adam Levine got me the most star-struck. I think it was because this man was a very big part of my childhood with songs like “Sugar” and “Moves like Jagger.” The only thing that was a little disappointing was that it felt like the whole band was a little less enthusiastic. Did they sound amazing? Absolutely. Could Adam have smiled a little more? Absolutely. Nonetheless, Maroon 5 deserves respect and attention for their amazingly catchy songs and their instrumental and vocal talent.

After Maroon Five came the Black Eyed Peas, which was the most hyped up and exhilarating performance I have ever seen in my entire life. The moment will.i.am and Taboo came out, the audience immediately started cheering. They were pumped to be there and started rapping in a hip-hop style. They performed iconic songs such as “Pump It Harder” and “Let’s Get It Started.”  The whole group gave it their all and it made the performance that much better. At one point, the entire audience was screaming “Pump it LOUDER!” while jumping up and down. Hands down, it was the most enthusiastic performance yet. I was screaming at the top of my lungs.

Now… the moment I had been waiting for my the whole day. They finally called out the queen herself, Doja Cat. Her back round dancers slowly cat walked onto the stage and Doja came out like the queen she is. She started singing, and her voice is just like it sounds in the recordings. She absolutely popped by acting sassy and in-charge. She is also a very talented dancer, and at one point she bent her back over and was singing upside down. She performed her most famous songs like “Get into It,” “Need to Know,” and even belted out her viral TikTok sensation, “Say So.” All in all, I am a Doja stan, and she made the stage all hers.

The last people to perform were none other than Coldplay. Before the show, every audience member was given a wrist band that was supposed to light up, but we had no idea when they would begin to glow. This was the time. The entire audience lit up in bright blue, red, and purple lights at separate times. One color every couple of beats. It was amazing. They performed some of their songs such as “Viva la Vida,” and their newest collaboration with BTS, “My Universe.” It was such an amazing feeling to be in the audience all singing and partying together. Cold play is such a classic.

In conclusion, this was the best concert that I have ever been to. I made memories in the Rose Bowl with my childhood friends and saw some of my favorite artists. Look out for the next We Can Survive concert in 2022.