The fight for power: ARMarchy? 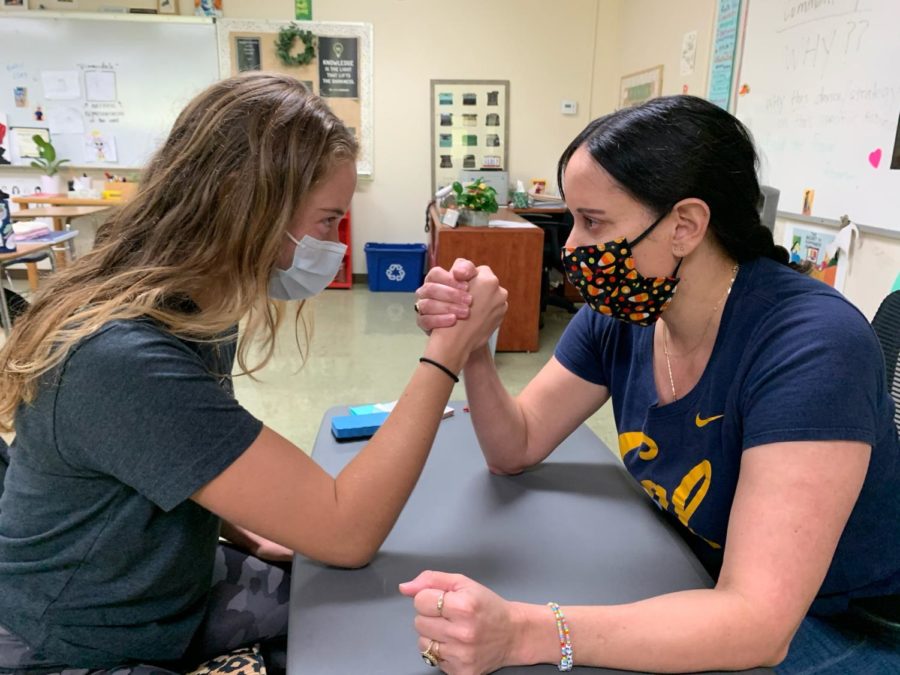 Ms. Barclay and Elena Walz try to intimidate each other before the competition.

This match is not the first competition between Elena and Barclay. Last year, the two battled it out in a Scattergories match, with Elena absolutely demolishing Barclay with her obscure knowledge of My Little Pony desserts, the Marzipan Mascarpone Meringue Madness.

However, this legendary showdown continues their epic saga of competition. The match kicked off with a bang during the first block of the day in Journalism. Ms. Barclay describes her preparation for the event saying, “I’ve been preparing for this day for a while. I’ve been lifting my 5-pound dumbbells to get stronger.” Elena, in typical Royal scholar fashion, prepared for the competition by researching how to win an arm-wrestling competition, learning that keeping your wrist at an abnormal angle helps win.

As the class watched in anticipation, the two take their seats at the plastic table. Alicia Dofelmier ’22 refereed the game, Barclay telling her, “make sure you watch out for if Elena does anything suspicious.”

With anticipation in the air, the match begins. Neither Barclay nor Elena take the lead right out of the gate, but rather both are stuck in a standstill. Barclay suddenly pulls ahead, but Elena manages to pull back, almost adding another victory to her 1-0 record.

The two go back and forth for about 45 seconds, each one pulling ahead only to have the other come back. As Elena pulls ahead almost ending the match, Barclay states, “No, she’s doing something weird. Hold her hand. I will not submit!”

The two battle it out for another 15 seconds until Elena becomes distracted, leaving Ms. Barclay with the perfect opportunity to demolish her competition. Elena’s arm falls, and Barclay is the champion. Elena discusses the competition saying that, “I’ll admit, my arms are pretty weak, but I had some outside help. Mr. Rodriguez, my cross country coach, gave me the tip that made me last a lot longer in this than I thought I would.”

It is safe to say that this is definitely not the last competition between the two. With a tied record of 1-1 and only seven months until Elena graduates, many more competitions are in the works to decide who is the ultimate human.