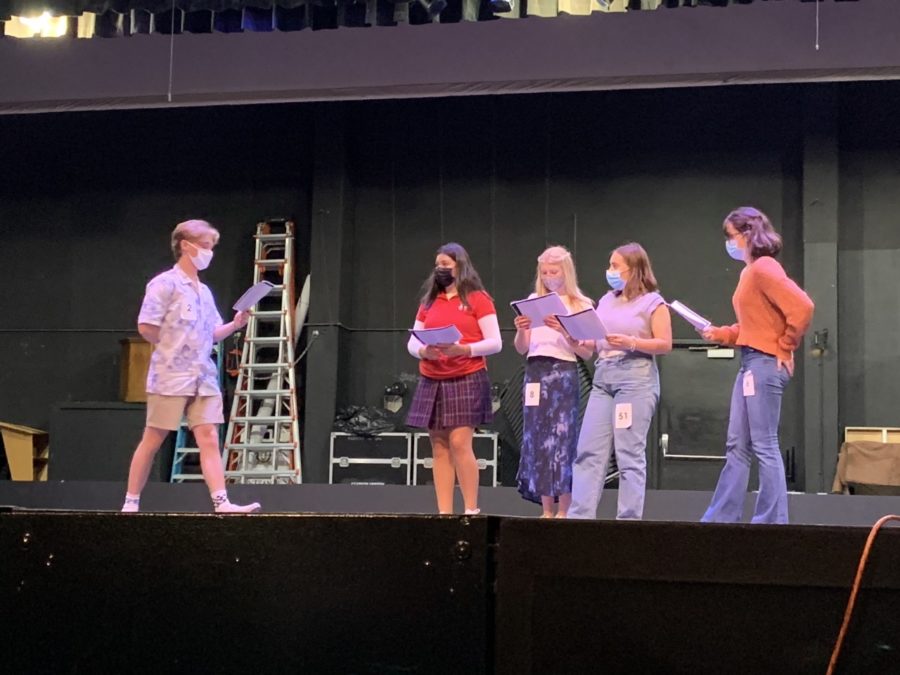 Rosary and Servite students perform a scene from Front during callbacks

On Monday, Aug. 30 at 3:30 p.m., performers from Servite and Rosary gathered to audition for roles in the Trinitas’ upcoming fall and winter productions.

The first step in their journey was to audition for either one show or both. Students were required to prepare either a song, a monologue, or both based on which show they hoped to be cast in. Groups of performers were sent in groups of ten, where they went one by one, auditioning on the Servite stage.

Junior Bridgette Sanders had this to say about the auditions: “Being back onstage at auditions was fantastic! I was excited to see so many new faces trying out for the fall and winter productions. We have such a special community – you could feel the positivity in the room radiating across the stage! I am always amazed by everyone’s talent!”

On Tuesday, callbacks for the fall show began. Mr. Marrone selected students to read certain scenes from the play. Stage Manager Aly Gastinell ’22 was responsible for watching all of the scenes that were performed. She shared, “Callbacks were amazing! Seeing everyone performing was so incredible and seeing everyone’s talents was unreal. Overall I think it went fantastic.”

On Wednesday, the callbacks for the winter musical started. Students performed a dance from the show and performed songs selected from the musical. Melissa Hanson ’22 said, “I absolutely loved every single part of this process. I’m very new to the whole theater world but I would definitely say it’s my biggest regret in high school is not doing it sooner. The whole community it’s so loving and welcoming. It’s like I had been doing this for years. I love this and I had so much fun. I’m so excited for the upcoming shows!”